The history of the Ch 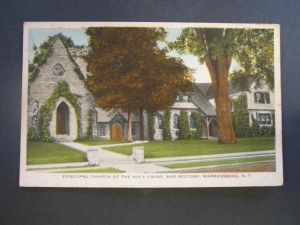 urch of the Holy Cross in Warrensburg begins with a vision: In 1798 a newly-ordained deacon, the Reverend Philander Chase (later Bishop of Ohio and then Illinois), told the Bishop of New York that he wanted to be a missionary, and Bishop Provoost sent him on a journey up the Hudson River in upstate New York. He recorded in his journal that he preached under a spreading tree in the town of Thurman (of which what is now Warrensburg was then a part) and that he established a preaching station thereto which he intended to return. No record remains of his first attempt to bring Anglicanism to this part of the world.

The vision was renewed, though, when the Reverend Robert Fulton Crary, scion of the famous steamship family and missionary to Caldwell (now Lake George village) and parts beyond, held a service at the Presbyterian Church in Warrensburg on the afternoon of the First Sunday in Advent, December 1, 1861. Services were held there regularly until he raised money to build an Episcopal Church. On May 18, 1864 the cornerstone was laid and the organization of the parish begun. In April of 1865 the parish was incorporated and admitted to the convention of the Diocese of New York in September of the same year. (When the Diocese of Albany was formed in 1869, the parish became part of that Convention).

The edifice was constructed from native stone by local stonemason Albert Alden. The first services were held in the church on February 5, 1865, and the building was consecrated by the Right Reverend Horatio Potter, Bishop of New York on June 13, 1866. Among the furnishings of the church consecrated that day was the pipe organ, still in use today, constructed by Messrs. Hall & Labagh of New York. The organ was refurbished in 1966, as part of the centennial celebrations in memory of former organist and choirmaster Edward M.P. Magee.

The missionary passed from the scene, but his vision for this place did not. A new chapter was opened on September 13, 1869, when the vestry elected the Reverend Henry Harrison Oberly, an assisting priest at Trinity Church, Wall Street, NY, and Superior of St. Athanasius’ Mission, to become the first Rector. Fr. Oberly commenced his work in Warrensburg on November 1, 1869. Fr. Oberly was representative of the growing “Catholic Movement” within the Episcopal Church, and introduced elements such as vestments, ceremonial, plainsong, and weekly Eucharist, which remain to the present day. Father Oberly resigned as rector in 1872 and has been succeeded by 17 priests.

Priests and Rectors of Holy Cross

Equally important to the clergy, though, have been the laymen and women who have guided the temporal affairs of the parish. Seventeen men have served as warden, including the first two, Col. Benjamin Peck Burhans and Stephen Griffing, who each served from 1864-1875. Three men have served more than twenty-five years in this capacity, including Henry Griffing (1877-1918), Charles Burhans (1897-1910), and Herrick Osborne (1949-1976). Over ninety men and women have served on the Vestry, many for long years; perhaps singular among them is Emerson S. Crandall, who served fifty-one years (1868-1876, 1881-1889, 1891-1926).

In 1886 a building to be used as Rectory and Parish Hall was erected as a memorial to the first senior warden, Benjamin P. Burhans. In 1987 the Wardens and Vestry voted to honor the long service to the parish of its Warden Emeritus by naming the parish hall “Herrick Osborne Hall.” A communication of December 6, 1889, from two sisters, Clara and Mary Richards, two major donors to the rectory project, proposed the establishment of a Circulating Library for the use of the residents of Warrensburg; this vision later found full expression in the Richard’s Library, the town’s public library.

Later building projects included the Cloister, a passage connecting the Church and the Parish hall. This was done in 1911. In 1978, an education wing of two stories was built. In 1966, a major renovation project was begun under the leadership of Father Paul E. Sanford, Jr. to commemorate the centennial year of the parish.

In 1890, Fr. Cary returned to Holy Cross to preach at the twenty-fifth anniversary of the first service in the Church. Something of his vision and spirit for this place may be caught in these words which, by God’s grace, continue to enlighten and inspire:

“The Church is no more a stranger in this village, but the Mother of many children… the Mother at whose knee you may pour out all your trails, and make know all your needs; the Home, who door is ever open, and into which you can flee from every danger; the House of prayer for all people, where all distinctions of the world vanish: where rank and lowly station, fame and obscurity, wealth and poverty are lost sight of, and God is the Father of all, His son, Jesus Christ, the Saviour of all, and whose Gospel was to be preached to all by the inspiration of the Holy Spirit. Many things have happened since the day of that opening service; glad and sorrowing hearts have been here; tears have been shed, and smiling faces seen within these walls; Penitential Psalms and glad allelujahs have been sung; deep, earnest prayers for pardon made, and joyous thanksgivings offered.”